Hummingbirds are back!   I was alerted to a hummer at our feeder by a distinctive ringing zip overhead.  All hummers make a buzzing or humming sound that gives the birds their name, but only one hummer makes that metallic zip sound:  A male broad-tailed hummingbird.
A male broad-tailed hummingbird has an iridescent green back and wings with a throat patch (gorget) that is red in the sun, but blackish otherwise.  The green back and the red throat patch are iridescent, which means they have a rainbow effect.  His chest is white.  His broad, rounded tail is reddish, with the two central feathers green. 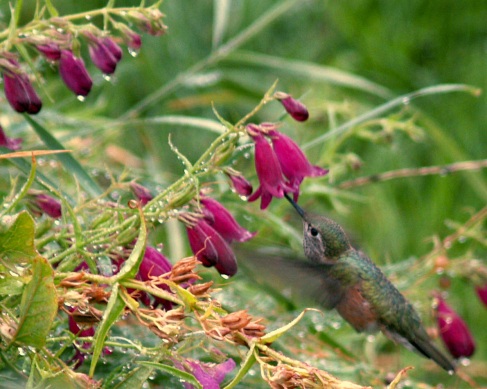 The female broad-tail, like many female birds, is a drab form of its mate.  Her back is iridescent green, her sides streaked with tan, and she is missing the throat patch.
The ringing sound is only made by the male broad-tailed hummingbird because only he has special feathers at his wingtips that vibrate.  The female, like other hummers, makes a humming sound when they fly.  The only other sounds hummingbirds make are “chips” or “tups”; hummingbirds do not sing.
Hummingbirds are an American exclusive.  There are over three hundred species of hummingbirds in North and South America – and none anyplace else.  Most species live in Central and South America.  We have just four species of hummingbirds common to Colorado: The Broad-tailed, the Rufous, the Black-chinned, and the Calliope.
Colorado hummingbirds make a bee-line (or would that be a hummingbird-line?) to the mountains in July, in a rush to claim the best nesting territory.  If you are lucky enough to see them there, watch them closely – you might get to see their elaborate courtship flights in which they fly straight up, then zoom down in a series of loops, trying to impress the ladies and keep away rivals. 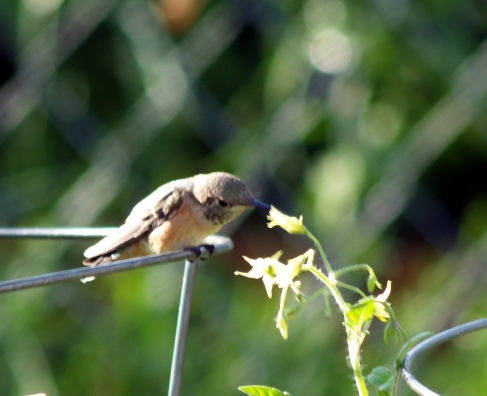 Hummingbirds lay two eggs about the size of a jelly bean.  Considering that the momma hummer is the size of about five jelly beans, this is a big egg. Females raise the young by themselves.  In fact, they may hide the nest from the males.
When their young can survive on their own, the hummingbirds come back down from the mountains to head back to Mexico or Central America, where all the Colorado hummers winter.  When the hummingbirds head south, they often stop at my feeder.  Every day it is a new batch and for every one that I see there may be ten that pass by.
Hummingbirds, are of course, tiny.  The ones we have in Colorado are about 4″ or 10 cm long, and weigh about 2-3 grams.  They can move their wings 180 degrees, and beat them 200 times per second, which lets them to fly forward, backward and hover.  This maneuverability allows them to sip nectar from flowers without actually needing to land.  It also means that they have to eat at least half their weight in sugar every day.  Talk about a sugar buzz!

3 thoughts on “Hummers Are Back”