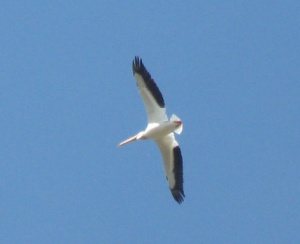 White pelicans have wingspan 9 feet across.

My son had his Eagle Project last weekend at Bear Creek Lake Park east of Morrison, creating a wetland to filter runoff from a new subdivision before it hits the flood-control reservoir.  Everything went wonderfully, and the wetland looks like it will work perfectly.
While we were there, we were treated to the sight of American White Pelicans as they left the reservoir to go fishing in other nearby bodies of water.  People who had never seen an American White Pelican were amazed.  I can’t blame them. The first time I saw one, I thought it was a glider going over. White pelicans are huge white birds, with black-edged wings that spread NINE FEET!
The big white birds fly in formation, wheeling and landing with precision that would

make the Air Force proud. On the water, they continue to work together cooperatively foraging by swimming in a line, then dipping their bills into the water at the same time to catch schooling “rough” or “trash”  fish.
If they can survive their first year – a big “if” as at least half of them die before they leave the nest – these birds have a potential life span of twenty years.  Once they are adults, their biggest threats are botulism from rotting vegetation at the edge of still ponds, hail, hitting wires or being shot for sport or because people assume they are eating commercially valuable fish.
American White Pelicans are relative newcomers to Colorado. The first arrived in the state in the 1960s, breeding here in summer before returning to the southern coasts for the winter. From three main breeding populations at Front Range reservoirs just a few years ago, pelican numbers have exploded. Today, any body of water of any size may have some of the big white birds doing their precision swimming routine.