Over the weekend, my son and I went to BioBlitz in Rocky Mountain National Park – twenty-four hours of counting plant, animal, insect, fungal, and bacterial species in the Park. As a bonus, we met hundreds of scientists passionate about species diversity. It was awesome. 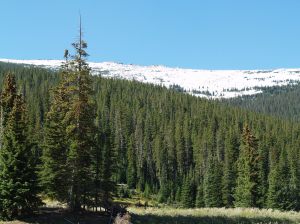 BioBlitz is the brain-child of legendary evolutionary biologist, E.O. Wilson, to introduce the public to the importance of species diversity. This BioBlitz, like the previous five blitzs, have been hosted by the National Park Service in a premier park, and sponsored by National Geographic. There will be one BioBlitz a year for the next four years, up to 2016, the centennial of the National Park Service.
The first session that my son and I attended looked at bacteria in the soil of the Englemann spruce-subalpine fir community. The site was at the old Hidden Valley Ski Area, a place that holds many great memories for me. We recorded soil temperature and moisture measurements. The scientists then explained that their research was to investigate how climate change (including soil temperature and moisture) will change soil bacteria activity, and how that, in turn, will change the amount of CO2 that the bacteria produce.
Fun bacteria facts:
• Bacteria are some of the oldest living organisms on Earth.
• With billions of years to evolve, there are far more different types of bacteria than there are any other type of plant, animal, insect, or anything else.
• Bacteria in your stomach, intestines, on your skin and elsewhere account for an estimated seven pounds of your body weight. Blame them.
• Over 90% of bacteria have yet to be studied, or even named. Helpful, harmful or just amazing – we have no idea what their role in the ecosystem is.