Rubber rabbitbrush is a shrub in the sunflower family.

Do the grey skies of November have you down? Are you missing the colors of fall’s leaves? Don’t despair. There is one plant that is still blooming after hard frosts have killed everything else – rubber rabbitbrush.
Rubber rabbitbrush, a light green shrub about three feet tall, blooms in late fall – September through November. The flowers are a golden yellow, betraying the fact that it is in the sunflower family (one of the largest of all plant families). Plains Tribes used the flowers for yellow dye, and for a tea for coughs and chest pains. Today, the flowers earn this shrub a place as an ornamental in xeriscape gardens. 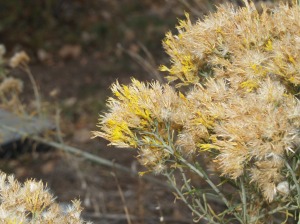 As with most shrubs, rubber rabbitbrush is well adapted to the desert. Its roots go deep looking for water, and its very thin light green leaves are covered with fine hairs to help hold in moisture. You’ll find rubber rabbitbrush among piñon pine-juniper forests and into the sagebrush if it gets an opening.
The masses of yellow flowers turn into small seeds. The seeds have parachute tops, just like their cousins, dandelions. The wind spreads these seeds far from their parents, scattering them into newly disturbed areas.
The Latin species name, nauseosus, comes from the plant’s smell. Between the bad smell and foul-tasting latex, few animals eat this shrub. Drought resistance, seeds that spread everywhere and bad taste means that you’ll see rabbitbrush in waste places after overgrazing, road building or other disturbance, places where other plants have a hard time getting started.
Rabbitbrush gets the ‘rabbit’ part of it’s common name from the fact that rabbits like to shelter under it’s dense branches. The ‘rubber’ part of its name was added with the discovery of latex in its sap. There have been several tries at extracting the rubber commercially, but so far, no success. Instead, scientists today are looking at the latex in rabbitbrush as a possible biofuel.