We had an angry young raven visit the backyard earlier this week. I don’t know what had annoyed it so much, but it was not happy. Actually, I suspect that the bird had just been put in its place by another raven that was perched in another tree a few houses down from ours.

Crows and ravens have long been a fascination of mine. They are smart social adaptable birds, all attributes that keep me interested.
I know that this was a raven because of the size of its bill. I know that it was young because the inside of his mouth is pink. What I don’t know is that it was a “he” or a “she” — raven sexes look identical.
Every gesture this bird made said it was angry. It landed in our neighbor’s ash tree with 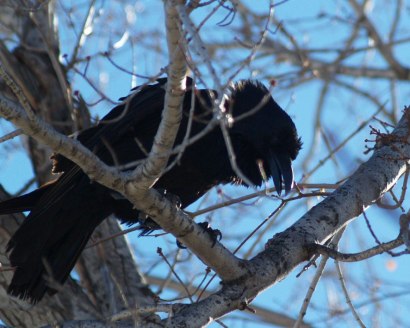 enough violence to cause our corgi to come out and bark at it. In turn, it scolded our dog in short, almost yipping calls, as if it was trying to imitate the sound the dog was making.

Once it had put our dog in it’s place, it proceeded to “chew” on a twig, making chorlting, gargling sounds.

Young raven pulling at a twig.

Young raven really taking it’s frustration out on the twig.

Twice it turned towards me and flashed its inner eyelid (nictitating membrane) at me, as if trying to intimidate somebody.

Young raven flashed his inner eyelids at me, trying to intimidate me.

Finally, it turned around, lowered its upper body, smoothed its feathers, spread its shoulders and made “tok tok tok” calls. The young raven was signalling its submission to the older one down the block.  And suddenly, I understood the saying about somebody having “ruffled feathers.” 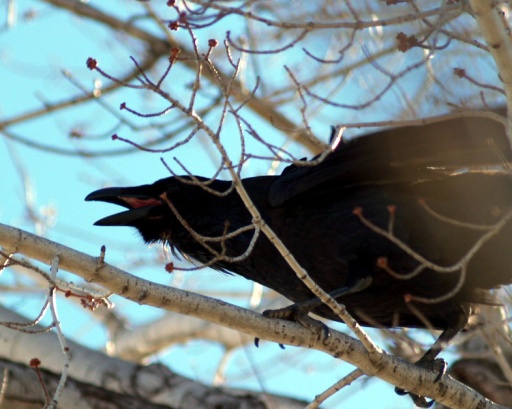 Head down, wings out is a submissive display. While it was doing this, it made a “tok tok” call.