I love to wake up to the sound of birds singing. The “twup tewerp” of robins, the trills of house finches, the hyena-like call of Northern flickers. But in the past few years, I’ve started to hear a new sound in the mornings: “Cha cha cha che e e e ! Cha cha cha che e e e!” It took me a long time to find the owner of this song, and then I realized it was in the shrubs next to me. And when I realized that, I realized that Spotted Towhees were all over the neighborhood.

According to Cornell’s Birds of North America website http://bna.birds.cornell.edu/bna/species/263/articles/introduction, Spotted Towhees breed in the plains, mountain shrub and lower elevations of the mountains, scratching for insects and seeds in the litter. When staking their claim to territory, though, they perch in the upper branches of a shrub and sing. A nice addition to the dawn chorus. 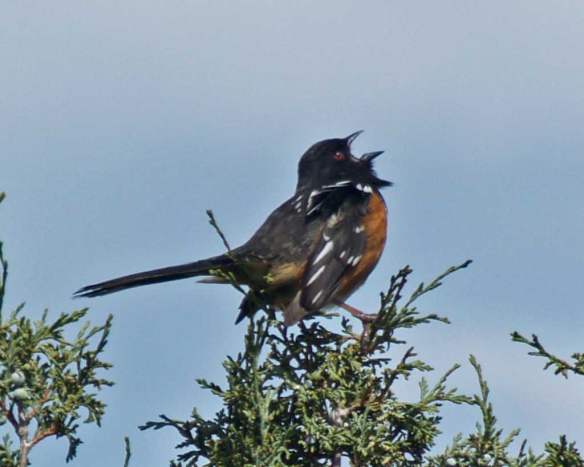