We’ve had a couple of red-breasted nuthatches coming to our bird baths up on Green Mountain this week. I’ve

always enjoyed nuthatches because they remind me of darts that have been thrown really hard.

After doing some research, I learned that you can tell males from females because males have black stripes on their heads, while those on a female are grey. They evidently stay in pairs all year round, but that the pairs can change at any time.

But nesting season is coming up quickly — they can start digging out holes in trees as early as the end of March, with egg-laying starting in mid-April.

These perky little birds eat bugs under the bark of trees during breeding season, and seeds any other time. You can recognize an insect-hunting 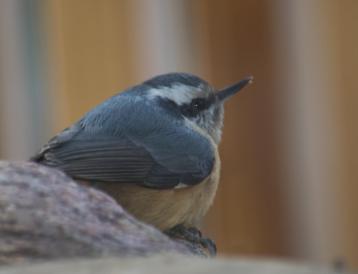 nuthatch instantly because they come down the tree trunk head first.

Red-breasted nuthatches don’t migrate, so with any luck, these guys will build a nest somewhere close by and stick around for the summer.

3 thoughts on “Nuthatches pairing up”