We have both crows and ravens in our neighborhood on Green Mountain, west of Denver. Angry Bird’s feathers ruffled   They can be surprisingly hard to tell apart.

Crows usually live in groups, using many different calls, the most common being the caw. They are smaller, sleeker birds. The big giveaway for me, though, is their more slender bill.

Crow in the back yard foraging for earthworms.

Ravens are heavier, bulkier, with beaks that mean business. Usually, you’ll find ravens in groups of 2-4. They croak more than they caw, a deep, rough sound. 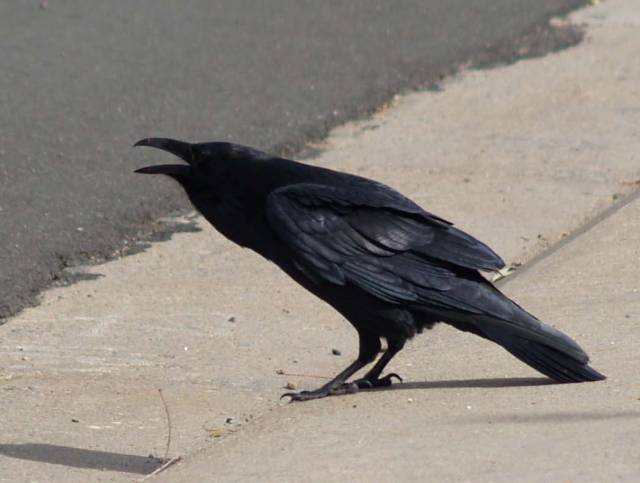 Raven croaking his possession of something tasty in the road. There were several crows in the spruce tree nearby that eventually took over the road kill.

Crows and ravens may flock together, which will make it easy to figure out who’s who — ravens are a third larger than crows, in fact they are among the largest perching birds in the world.

Recently, while I was out walking the dogs, I saw a flock of crows trailing behind a raven, cawing like crazy. On my return trip, I saw both crows and ravens feasting at a ripped open trash bag, garbage strewn around the yard. The crows had found the bag, but needed the raven, with it’s heavy beak, to open it. So they had shown it the food resource, and the birds were happy.

This was not the first time the birds had targeted the trash, either. As I got closer, the door to the house opened and a man rushed out to startle the birds away. I heard his wife say “They did it again. I’ll get another trash bag.”

Cooperation between crows and ravens only goes so far, though. Yesterday, we watched a small flock of crows mob a raven, going so far as to peck it on the head in flight. This is nesting season — maybe the raven had gotten too close to the crow’s nest.

3 Responses to Crows and Ravens