Thanks to the nice weather, I worked out in the yard for a good bit last weekend. As I worked, I saw and heard our normal back yard wildlife — feisty squirrels, black-capped chickadees, house finches, Northern flickers, dragonflies and big yellow swallow-tail butterflies. Then I saw something unusual — an orange butterfly. I assumed it was a Viceroy, because it flew right past the big patches of milkweed we’ve let grow for the Monarchs that might wander through our yard (Bees and Butterflies).

Then I saw another. And another. None of them were landing anywhere in the yard, but I decided to try to photograph them anyway. Maybe one would alight just long enough for me to snap a shot.

As I watched them more closely,  I began to have a niggling feeling that maybe I should check my butterfly identification books. In the meantime, I took a few photos. 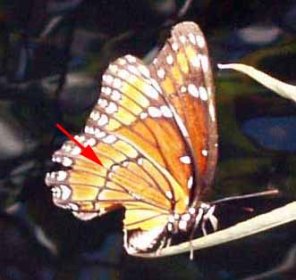 Monarchs are orange with black stripes. They differ from very similar Viceroys in that Viceroys have a stripe along their lower wing. Otherwise, they are almost identical. So the photo on the left, taken in our back yard, is a Monarch! I’m glad it stopped by.

Starting in March, Monarchs migrate from Mexico and Southern California to Canada every year, reaching their northern limits in late June. We get our first Monarchs about the same time. 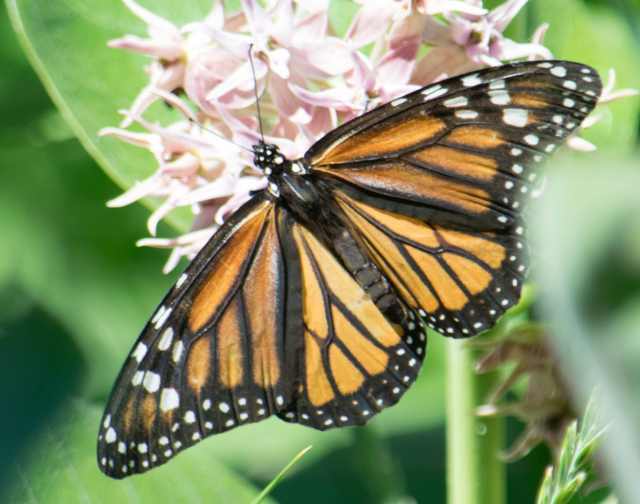 Monarch feeding on milkweed in our backyard.

You can watch Monarchs as they travel at this website: Lerner Monarch Butterfly Migration Map Spring 2018. They even have a site where you can report your observations! What to Report

Amy Law is a science geek. She feels about science the way some people feel about music, or art, or sports – a total and complete emotional connection. She thinks in science. For Amy, there’s nothing better than helping people see the beauty of science as she does. She loves to untangle a complicated subject into its parts, explaining it so that anybody can understand what’s happening. Let her show you her world...
View all posts by Amy Law →
This entry was posted in Colorado Mileposts and tagged Citizen Science, Colorado, milkweed, Monarch butterfly, science, Viceroy butterfly. Bookmark the permalink.